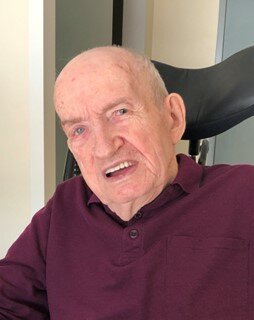 He died peacefully at the Mattawa Algonquin Nursing Home; Emile was predeceased by his parents, Wilfred & Doreen Belanger. He was also predeceased by his sisters Gay and Jackie and by his nephews Dan (Wynter) and Michael Clarke. Emile was the devoted uncle to Laurie Clarke (Gerry Janveaux), Patrick Clarke, grandniece Leslie Clarke (Mathieu Tremblay). Emile was born and raised in Mattawa, where he developed a passion for hunting & fishing. In addition, he enjoyed cards, bingo, bowling, and curling. He retired from the North Bay Jail after 30 years of service. He was a long-standing member of the Royal Canadian Legion.

A heartfelt thank-you to the nursing home staff, for their devotion to Emile’s care in his last years.

A Mass of Christian Burial will be held at St. Anne’s Roman Catholic Church on Tuesday, September 20th at 11:00 am. His ashes will be interred in the family plot at St. Anne’s Roman Catholic Cemetery. In lieu of flowers, donations to the Canadian Diabetes Association would be gratefully appreciated. The arrangement under the direction of the Martyn & Sloan “Mattawa Chapel”,

To send flowers to the family or plant a tree in memory of Gilbert Emile Joseph Belanger, please visit Tribute Store

Share Your Memory of
Gilbert Emile Joseph
Upload Your Memory View All Memories
Be the first to upload a memory!
Share A Memory
Send Flowers