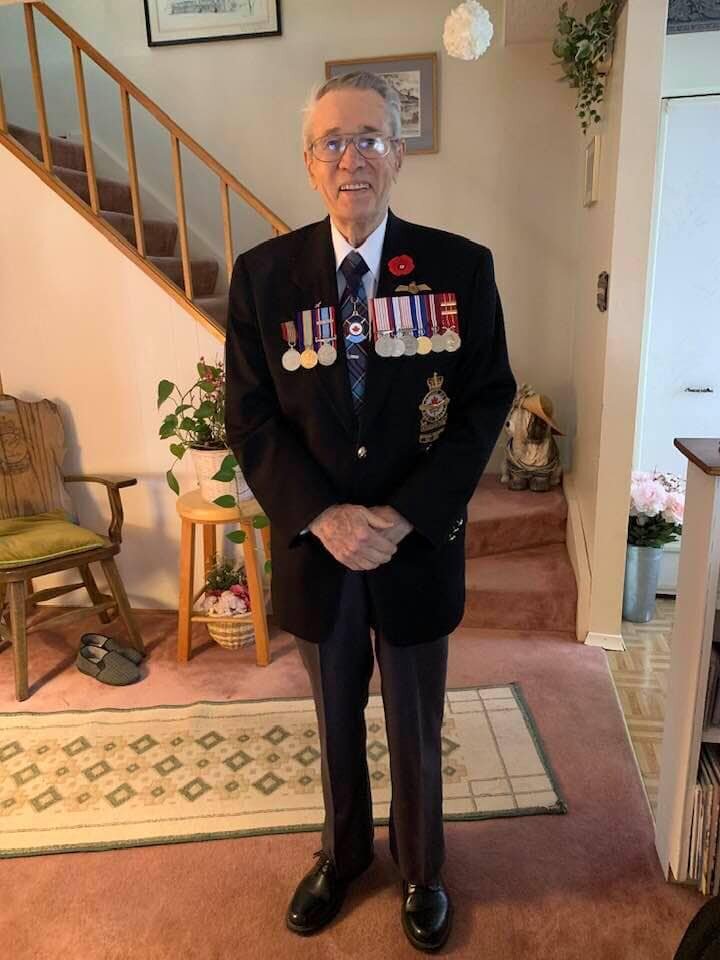 Please share a memory of Ronald to include in a keepsake book for family and friends.
View Tribute Book

Passed away peacefully at the North Bay Regional Health Centre with family by his side on Saturday, August 20, 2022, in his 94th year.

Brigadier General Ron Button retired from the RCAF/Canadian Forces in 1983 having served for 35 years.

During those years he flew on two Transport Squadrons and three All-Weather Fighter Squadrons. He is a graduate of the RCAF Staff College and the National Defence College of Canada. He completed tours on the staff of transport, Air Defence, RCAF and National Defence Headquarters. He commanded a unit (Air movements during Korean Airlift), a school (First Integrated Officers’ School), a radar station (Northern Ontario), a Base (CFB Toronto) and ultimately was appointed to his own command as a commander of Central Region Ontario and Commandant of the Canadian Forces Training System comprised of five bases and 20 Recruit and Trades Training schools. He Served twice in the USA at NORAD Installations and following his promotion to Brigadier General in 1978, his penultimate tour was in Washington, D.C. Where he served as the Canadian Air Attache and Senior Canadian Liaison Officer to the USA.

As an avid golfer he was a member of the Pinewood Golf Club for many years. He enjoyed his daily crossword and sudoku puzzles and loved telling stories. Ron will be sadly missed by his family and many friends.

Cremation will take place and a Celebration of his Life will take place at a later date. If desired, donations to a charity of choice or the North Bay Regional Health Centre will be gratefully acknowledged as expressions of sympathy. Arrangements entrusted to Basic Cremation Services.

To plant a beautiful memorial tree in memory of Ronald Button, please visit our Tree Store

Look inside to read what others have shared
Family and friends are coming together online to create a special keepsake. Every memory left on the online obituary will be automatically included in this book.
View Tribute Book
Services for Ronald Button
There are no events scheduled. You can still show your support by planting a tree in memory of Ronald Button.
Plant a tree in memory of Ronald