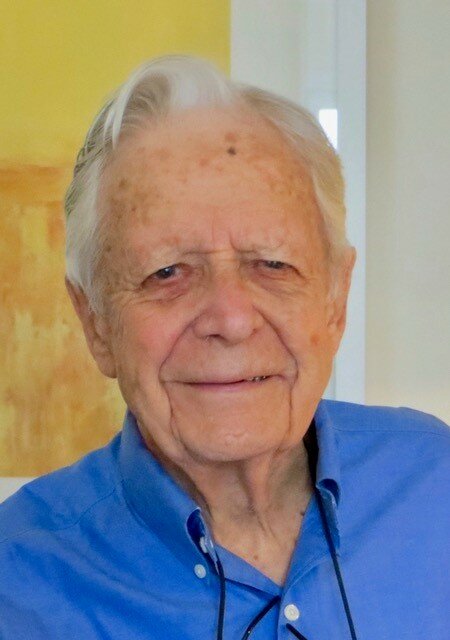 Please share a memory of Clarence John Bruce to include in a keepsake book for family and friends.
View Tribute Book

Bruce passed away peacefully at Nipissing Manor in Corbeil on Saturday, March 12, 2022; he was in his 100th year. Beloved husband of the late Jacqueline “Jackie” Goulet (nee Wilson) of North Bay. Cherished father of Michael Goulet (Carol) of Burlington and Paul Goulet (Louise) of Belleville. Proud grandfather of Gillian, Gregory, Matthew, Adam, and Shauna. He is survived by his sister Joan Dullege of Toronto. Bruce joined the Royal Canadian Corps of Signals in 1942 and served in the United Kingdom, Central Mediterranean, and Continental Europe in WWII. Bruce and Jackie for many years owned and operated Bruce Office Supply, retiring in 1974. Bruce became active in the North Bay community serving on several boards and commissions, including terms as President of the Chamber of Commerce, Director of the Rotary Club of North Bay, and President of the Dominion Day Committee. He also became progressively active in municipal politics commencing in 1960 as an alderman, then as Deputy Mayor, and then as Mayor from 1971 – 1973. Bruce was a long-time member of the Royal Canadian Legion and a former member of the United Nations Club of North Bay.  He was also chair of the Golden Mile Committee, a volunteer group dedicated to the successful completion of the plan to retain the waterfront area at the core of the city as a “people place”.

His family will receive friends at the MARTYN FUNERAL HOME on Wednesday March 16th, from 2:30-4:30 PM. A Funeral Service will be held at the Martyn Funeral Home on Thursday, March 17th at 11:00 AM Burial will take place this spring at the North Bay Union Cemetery. If desired, donations to the Red Cross/Ukraine fund would be gratefully acknowledged as expressions of sympathy (Note, once you have donated online, please call the Martyn Funeral Home at 705-472-8810, so our staff can provide a Donation Card for the family).

To send flowers to the family or plant a tree in memory of Clarence John Bruce Goulet, please visit Tribute Store
Wednesday
16
March