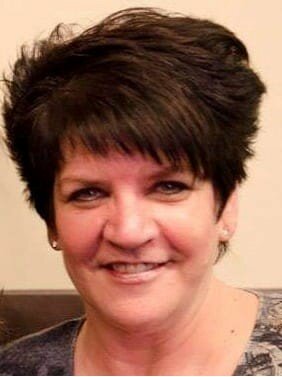 Please share a memory of Hali to include in a keepsake book for family and friends.
View Tribute Book

It is with great sadness that we announce that Hali Leigh Carlson (nee Blythe), passed away on Thursday December 16, 2021, peacefully at home with her family at her side.

She was the dearly loved wife of Blair Carlson, loving mother of Brandon Blythe (Dayani) and Erika Burge (Michael). She was a devoted GiGi to her granddaughter Brook Burge.

She will be remembered by her loving Aunts, Jo-Anne Lopata (Walter, deceased), and Jackie Morden.

She will be dearly missed by many cousins, nieces, and nephews.

Hali was born and grew up in Hamilton, ON. She moved with her family to North Bay, ON in 1991. Hali worked side by side with Blair for many, many years. Through her years of work with promotional products, and her volunteer work, she seemed to know every one in town, and if she met someone new, they more often than not discovered they had mutual friends.

Hali had a second family, her Dreamcoat family.  Dreamcoat Fantasy Theatre has been providing musical theatre programs to our community for 22 years and Hali was a founding member of the charity.  She was directly involved in every one of the more than 80 shows produced and she touched the lives of thousands of children and families.  Her involvement in the arts spread to many more performing arts groups in the city.  She loved to hear from former Dreamcoat kids when they would reach out years later to thank her or express their appreciation for the experiences that helped shape their lives.

The family would like to express their appreciation for the outpouring of messages and condolences and the beautiful memories and stories that have been shared with them.  A service is planned for either late spring or early fall.

In lieu of flowers donations to Dreamcoat Fantasy Theatre would be greatly appreciated.

To plant a beautiful memorial tree in memory of Hali Carlson, please visit our Tree Store