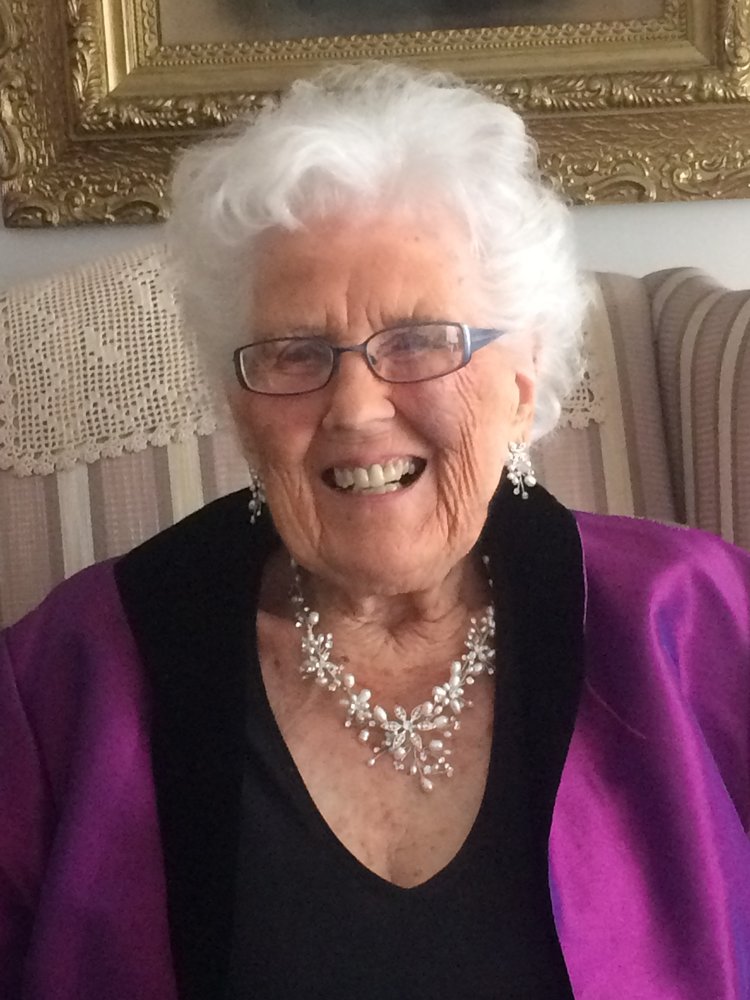 Just three days before her 99th birthday, our mother Pearl passed over to be with our father and grandparents.  She sustained a fall, probably tripping over her accordion on her way to do battle with a house fly….she hated house flies.  Mother will be missed.

Predeceased in 2004 by her husband Bill, daughter Colleen in 1950 and grandson Thomas in 1993. She was the daughter of Archie McLennan and Jessie Ireland and is survived by her children William, Thomas (Mary), John (Marg), Anne (Bob deceased), Mark (Steve) and Peter.  Mother is survived by her grandchildren Thomas Christopher, Jonathan (Tina) Michael (Linda) Andrew (Ellen)  William (Carrie), Noreen (Steve), Alan, Sarah (Zack), Sean (Jennifer), Jason (Sarah) Adam, Katharine (Alen), and greatgrandchildren Alexander, Jessie, Thomas,  Khristian, Annie, Mya, Jonah, Leila, Stella, Audrey, Fintan, Myra, Amelia, Nora, Cole, Annie Pearl.  Mom played an active role in her grandchildren and great grandchildren’s lives with letters, cards, phone calls and individual time when we all got together.  And oh, we did get together because as she aged she took to throwing great parties. The children enjoyed being around her because she took the time to greet them and see what was going on with them.  She was a pleasure to watch in action during family gatherings.

Mother was devoted to her husband and family and worked hard to provide a good home.  She was a great cook and baker, a wise counsellor and truly a funny character.  Not many would have known of the later, as she was quiet, but she had a great comment to make when one was needed. In the 1950’s during the hard times after the war, our house was labelled as the place for transients to get a meal at our back door.  No one was ever turned away…. even if it meant tighter portion control for the rest of us.  Those lessons were taught by actions, not words.

Our home was filled with good music…. Mom on the accordion or violin, John on the piano, Mark, Anne, and Peter singing.  There was plenty of good food and lots of stories.  Meals and family time were mandatory, everyone took a share in household chores.  She taught us to clean house, do laundry, iron a shirt, and sew on a button so with necessity there were no excuses.   We had the ability to do the tasks.

Will we miss her?  You bet!  She won’t be forgotten; she will always be loved. Go forth and rest well, dear one.