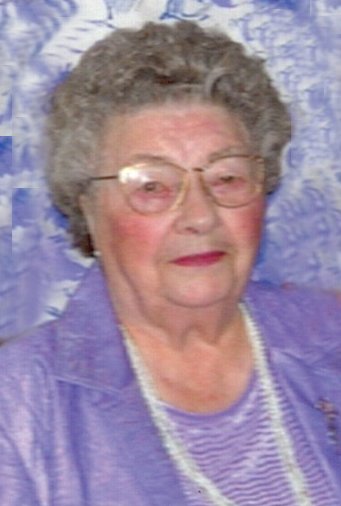 Ruth sadly announces the peaceful passing of her mother, Dorothy, on Tuesday, June 23, 2020 at her residence in Sundridge, where she has resided for the last sixteen years. Dorothy was in her 99th year! Dorothy was predeceased by her husband Arthur (1990), son David (2016), sister Shirley (2019) and brother Charlie.

Dorothy was born January 22, 1922 to George and Eva (Trevor) Hay in Chatham, New Brunswick.   After graduating High School (Hartland), she attended the Provincial Normal School and graduated with first class licence. After teaching for five years in New Brunswick, Dorothy entered The Deaconess and Missionary Training House, which later became The Anglican Women’s Training College. She graduated in 1949 and went to Halifax, Nova Scotia as Matron of ST. Paul’s Home for Girls, which was under St. Paul’s Church, Halifax. This was very satisfying as the girls grew physically and spiritually under the leadership of their matron.

In 1951, Dorothy married The Rev’d Canon Arthur L. Chabot in ST. Paul’s Church, Halifax. Together they shared a life of ministry with much satisfaction beginning in Coniston, moving to New Liskeard, then Marathon and Englehart, finally retiring to North Bay in 1983. Their life together was spent completely in the Diocese of Algoma.

Family and the church were the main interest in life for Dorothy. Dorothy was an active member of Christ Church, North Bay until a couple of years ago, including reading Sunday lessons. The W.A. now known as the Anglican Church Women was always a part of life since the time she started in the W.A. with her mother. Dorothy was Diocesan President of the A.C.W. in the Diocese of Algoma and also held positions on the Executive. She was active in the Retired Teachers of Ontario, the North Bay Canadian Club, and the Order of the Eastern Star. For several years, Dorothy was president of The North Bay Prayer Book Society as well as a member of the National Prayer Book Society.

With ST. Paul’s words, “I can do all things through Christ who strengtheneth me.” Phillippians 4:13, was the inspiration that gave the necessary strength to meet each new challenge in life.

Ruth would like to thank Dr. Ian Cowan, nurse Carley Millar, Care Partner Carol Burton and Dawn Basso (and family) for making it possible for her mother to remain at home.

A funeral service will be held Friday, June 26, 2020 at Christ Church, Greenwood Avenue at 1PM. In lieu of flowers, donations to the Prayer Book Society or the Primate’s World Relief and Development Fund or a charity of your choice would be gratefully acknowledged as expressions of sympathy.

Share Your Memory of
Dorothy
Upload Your Memory View All Memories
Be the first to upload a memory!
Share A Memory
Plant a Tree