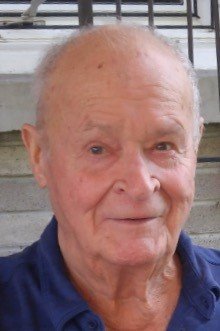 Born and raised on a farm in Loch Erne, Ontario, Everett was the son of the late Edward and Edna Kirkham.  Predeceased by his brother Charlie (Lillie) and his sister Clara Hunt (late Jim). Survived by his sisters Joyce Croteau (late Denis), and Doris Breadner (late Bill), and his brothers Bill (late Freda) and Frank (Sue).

Son in law and best friend of the late Otto and Laura Wickman of Parry Sound.

Everett worked a variety of jobs as a young man, with his memories of driving transport as his favorite. A natural salesman, he moved his family from Streetsville, Ont. to North Bay in 1971 where he excelled in his career in lawn and garden, specializing in chainsaws. Until retirement  he travelled in a territory covering both Ontario  and Manitoba.

Community minded, Everett volunteered for decades with CNIB, Canadian Cancer Society, Heart and Stroke and the Nipissing Respiratory Organization.  He was a proud member of the Kinsman Club, K40, Masonic Lodge No. 420 and Shriners.

The family send a special thank you to those who helped us honour his final wishes;

Dr. Vaughan, Dr. Jinnah, Care Partners, VON and Rev. Roni Beharry with a special mention to VON nurse Sherryll for her caring and dedication.  We also appreciate the North Bay Firefighters and VON Tara Moffat who arranged for a car ride with his wife, so he could have his last ride in his own car.   A private family ceremony has been held. Burial at Fairholme Cemetery, Hwy 124, Whitestone on Friday May 1st.  Donations to Emmanuel United Church or the Shriner’s Hospital, will be gratefully acknowledged as expressions of sympathy.  Arrangements entrusted to Martyn funeral home with online condolences at www.martynfh.com.

Share Your Memory of
Everett
Upload Your Memory View All Memories
Be the first to upload a memory!
Share A Memory
Plant a Tree