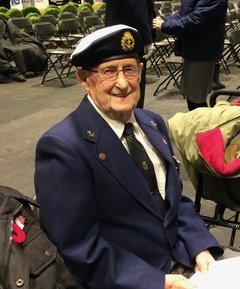 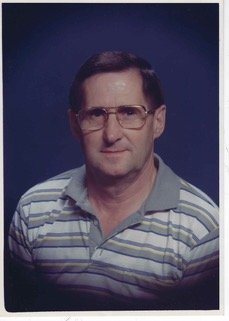 The family announces with deep sorrow, the passing of our beloved, wonderful, patient, and kind father, Chuck Barrett, at 94-years of age. A truly gentle soul, and loving dad, to Debbie Campbell (Ken, deceased), and Nancy Pitre (Denis). Extra-special Poppa to Michael Campbell (Melissa), Kaley Tastula (Adam), and Briana Pitre. Great-Grandpa to Jackson and Molly Campbell and Emmitt and Isla Tastula.Fondly remembered by his many nieces and nephews as well as brothers-in-law, Russ (Edie), and Dale (Gayle) Letts. Predeceased by his wife of 61 years, Betty (2013), son-in-law Ken Campbell, brother Ron (Helen) Barrett, sister Jean (Bob) Lachine, brothers and sisters-in-law , Gary and Jean Letts, and Lillian and Bill Lamb.  Born in Chatham, Ontario, the son of Lorvel and Eva Barrett, his father passed when Dad was a young boy. He thereafter took special care of his mother and younger siblings. Our teen-aged father, enlisted in the Navy and proudly served from 1943 to 1946 as a Naval Seaman aboard the HMCS Eastview, escorting convoys across the Atlantic. He made four trips across the ocean, and remarked, “We couldn’t see the enemy or the submarines, and the air force, you had to watch out for them as well.” After the war ended, Dad trained as a mason, and subsequently worked for the CPR from 1950 to 1960, followed by the North Bay Psychiatric Hospital as a Psychiatric Nursing Assistant. He ended his working years as a supervisor at the hospital woodshop, retiring from the Jane Street location in 1988. Afterwards, Dad enjoyed a much-deserved retirement. Our parents loved to travel and camp. Dad was a founding-member of the Norlanders RV club. Mom and Dad spent many wonderful years, travelling with “Aunt Lillian and Uncle Bill”, to the west and east coasts, to Florida, and to many places in between.  Dad was an avid golfer and curler up until he turned 90. He was also a Jays’ fan (at least up until last year)! In his twilight years, Dad was a faithful mall-walker, arriving promptly to Northgate each morning to do his “laps”. He continued to do so, up until this month, making his way around the mall with his walker. Dad remained sharp-as-a-whistle, never forgetting a family birthday. He looked forward to his weekly crib-game and beer with his son-in-law, Denis, counting his points without missing a beat, and more often than not, winning. Due to the pandemic, there will be no visitation at this time. Cremation has taken place, and a commemoration of Dad’s life will be held at a later date. A very special thank you to Doctors Brian and Kathryn Shaw as well as Dr. Seguin. Your kindness will never be forgotten. Thank you to the staff on C3, especially Shannon, for her special care and attention as Dad made his final voyage. Finally, a heartfelt thank you to all the wonderful staff at Marina Point; his home for the past two years. Dad will be greatly missed, not only by his “girls” and our families, but by his special neighbours and friends. Although it is never easy to say “good-bye,” we were blessed to have him as long as we did, and privileged to call this man “Dad,” “Poppa,” and “Grandpa.” Donations in Dad’s memory may be made to the North Bay Naval Association, Serenity House, or Branch 23 Legion.  Funeral arrangements are entrusted to MARTYN FUNERAL HOME.

Share Your Memory of
Lorvel
Upload Your Memory View All Memories
Be the first to upload a memory!
Share A Memory
Plant a Tree