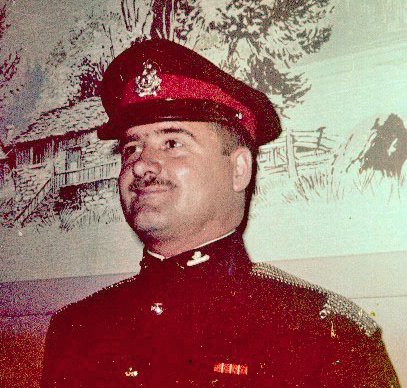 It is with great sadness that the family of John E.T. (Jet) Smith announces his passing on Saturday, February 29th, at the age of 88 after a long and valiant fight against bladder cancer.  He is predeceased by his parents Thomas & Violet Smith, his siblings, Raymond, Joyce & Bud and Son-In-Law Glen Fowler.  Jet is survived by his wife, Sheila, and his six daughters: Ann (Gary) Smith, Sherry (Dave) Allan, June Fowler, Susan Smith, Violet (Ken) O’Reilly, and Nancy (Brian) Smith; Grandchildren Hogan (Hailey), Ryn, Nadine (Keith), Chris (Renee), Jon, Justin (Kadie), Deanna (Ben), Jennifer, Zach and Vanessa; Great Grandchildren Ethan, Craig, Aidan, Shiloh, Xavier, Malcolm, Emma, Luxton, Rowan, Liam and Elijah as well as members of his extended family Wayde (Lisa), Brandon, Autumn, Angus, Cindy, Bertina, Ru, Alisha, Grenville (Michelle), Tracey (Brian), Wade (Tammy), Aaron, Tim (Jenny), Sammantha, Naythan, Carter, Liam and Kayden.  He started his affiliation with the Algonquins in 1947 where he rose to the rank of Regimental Sergeant Major.  In 1969, he left the regiment to become affiliated with the Algonquin Cadet Corps to help in their re-organization. He rose to the rank of Major and the Commanding Officer of the Algonquin Cadet Corps and then became involved in the Army Cadet League of Canada until recently. The family would like to thank Drs. Pace and Senior and their staff; Holly Norman and the nurses at North Bay Regional Health Centre as well as the nurses from Care Partners. He was a great father, family man and mentor and will be missed by many. Visitation will be held at Martyn’s Funeral Home on Saturday, March 7th from 2 to 4 p.m. with the service at 7:00 p.m. that evening.  In lieu of flowers, a donation to the Army Cadet League, Cancer Society or Kidney Foundation would be appreciated by the family.

To send flowers to the family or plant a tree in memory of John Smith, please visit Tribute Store
Saturday
7
March

Share Your Memory of
John
Upload Your Memory View All Memories
Be the first to upload a memory!
Share A Memory
Send Flowers