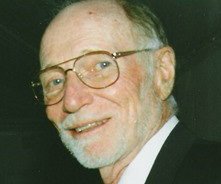 Kenneth Robert Holloway was born in Brantford, Ontario April 1st, 1925, and passed away peacefully in North Bay, Ontario on Friday, September 13th, 2019, still residing in his home (his “Wee Hoose”) overlooking beautiful Trout Lake. In 1946 he married Margaret Jean Campbell, after serving in the Navy aboard a Corvette Ship in WWII.  Due to the shortage of homes, their first apartment was in the renovated barracks at the air force base.  There was a long waiting list for appliances, such as fridges and stoves, but everyone was happy the war was over. Ken worked for Bell Canada until his retirement in 1984.  His career transferred him to North Bay, Sudbury, Richmond Hill (Toronto) and finally back to his beloved North Bay where he built a home on Trout Lake and purchased his first sailboat.  Many happy summers were spent on Sundays racing the “Wayfarers”.  Winter months were enjoyed snowmobiling cross country (sometimes hundreds of miles. His wife Jean passed away in 1985, (only 59 years old).  Ken spent his retirement years travelling the globe:  Australia, New Zealand, Scandinavia, Russia, China, South America, plus many cruises in the Caribbean with friends Linda and Charlie Anderson. Ken had a rich and rewarding life, with many adventures. He will be remembered by his children:  Lesley (George) Zolob, Scott (Cathy Kaufman) Holloway, and Stacey (Scott Caverly); his grandchildren:  Lori Addison, Bryan Zolob, Cathi (Greg) Laithwaite, Holly Caverly, Zoe Caverly, and Dixon Caverly.  Also loved by Great Grandchildren:  Bailey Addison, James and Michael Zolob, Clayton, Quinn and Landon Laithwaite. Family will receive friends at the MARTYN FUNERAL HOME on Sunday, September 15, 2019 from 11:00 a.m. until the time of the service at 1:00 p.m.  Burial will take place at North Bay Union Cemetery.  If friends so desire, donations may be made to the Veteran Affairs of Canada in Ken’s memory. A special thank you to the care givers at Blue Sky, Preferred Care, Care Partners, Amber and the Palliative Care Team.   Your hard work allowed Ken to stay at home until his passing, with love and dignity.

Share Your Memory of
Kenneth
Upload Your Memory View All Memories
Be the first to upload a memory!
Share A Memory
Send Flowers