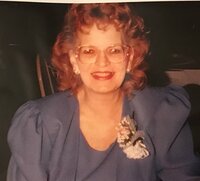 The Good Lord called SHIRLEY home on Tuesday September 13, 2022 at the age of 87, in North Bay ON, from complications after a recent illness. She was born on June 11, 1935 in North Bay to Guy and Jean McLeod. In 1956 she married Bruce Ruggles and together they raised their 4 children, Susan, Cathy, Tim and Randy. Shirley worked for a short time with her husband at CFCH Radio Station in the 1960’s. Shirley is predeceased by her parents, her brother Denver, her husband Bruce, her granddaughter Morgan and great-grandson Beau. She is survived by her daughters Susan (Wayne) and Cathy (Laurent), and her sons Tim (Judy), and Randy, along with 7 grandchildren and 8 great grandchildren. Dearly remembered by her sister Judy Loach. Visitation will be held at Martyn Funeral Home on Thursday, September 15th from 6-8pm. A Funeral Service will be held in the Martyn Funeral Home Chapel on Friday September 16th, at 11:00 am. Interment at the North Bay Union Cemetery. Memorial donations may be made in Shirley’s name to the Palliative Care Unit at the North Bay Regional Health Centre Foundation.