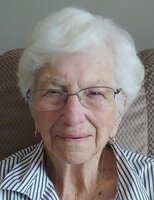 Letitia’s family is heartbroken to announce her passing one day before her 95th birthday on September 7, 2022, at the North Bay Regional Hospital. She was born September 8, 1927, in North Bay to Annabelle and Grant Lenfesty.  In 1949 Letitia married John Smith (predeceased 2016) and together they raised 4 children in the Graniteville area where many lifelong friendships were formed.  After being a stay-at-home mom for years, Letitia returned to work in the retail and clerical field including the creation of the Home Care organization from which she retired.  After retirement came many years of travel adventures in the Caribbean and Florida as well as relaxation at the family cottage on Hemlock Island.  Following the lives of her grandchildren gave her great joy and family was always most important. In 2019 Letitia moved to Empire Living where she became an active resident and made many new friends.  The family thanks the staff at the Empire for their excellent care.

Donations in Letitia’s memory to the North Bay Regional Health Centre will be gratefully acknowledged as expressions of sympathy.