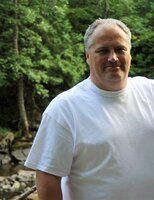 With heavy hearts, we announce the passing of Aaron Northrup on Sunday, April 24, 2022, at the North Bay Regional Health Centre.

He will be lovingly remembered by his wife of 27 years, Sandra; his children: Daniella and Gibson; his sister Kendra (Danny).  Aaron will be dearly missed by his Aunt and Uncle, Trudy, and Rick Stanton; his in-law’s, Bob and Gwen Daniher; sister-in-law Cheryl (Vic), brother-in-law Rob; Uncle Bubba to Kailey, Harlee, Carlee, Veronica, Bennett, Abigale, and Layla.   Great Uncle to Sophia and Savannah, Dear cousin to Colleen (Mike) and their children Jack and Will, Meaghan (Steve) and their children, Lauren, Sam, and Charlie.

Aaron was a Staff Sgt, who’s career with the North Bay Police Service started in 2000; working in many sections including:  Patrol, Street Crimes, Dare, Traffic and Training (just to name a few).   He was dedicated to the Service for 20 years, and he took great pride in mentoring and recruiting on his own for the Service.  Aaron took pride in his roles with the Police Association and created many great friendships.  Aaron also coached many sports at West Ferris and in the community, including softball, soccer, volleyball, and basketball, even if neither of his kids were on the team.

Please wear a Hawaiian shirt or wear an article of clothing Aaron bought for you as the dress code is casual!

In memory of Aaron, donation’s may be made to All Heart Pet Rescue (where he got Lilo, the dog he “didn’t want!”) or to KidSport North Bay to continue Aaron’s legacy and love of sport, giving every child an opportunity to play sports and be the best they can be. **Cheques Only**

***Everyone is encouraged to wear a facemask.