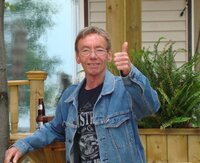 We mourn the loss of the kind soul and warm heart of David Meinke.

Regardless of whether you addressed him as Dave, Dad, Babe, Popa, Uncle Dave or ‘Big Little Brother’, you knew him as a wholly devoted family man with a sterling work ethic.

Whether washing windows on a high-rise, waxing the floor of a public school, sandblasting a train car, captaining a tugboat, preparing a nutritious meal or helping douse a house fire,  one thing was constant; he brought his reliable diligence and sunny disposition to every workplace.  {Much to the delight of his many co-workers}

The most surefire way to fill his day with joy was to share yours.  Nothing made him happier than to see and hear about the personal successes and milestones of his favourite people.   No matter what you were striving for, he was rooting for you.  Conversely, no matter what hardship had befallen you, he was compassionate.  This trait was especially impressive, considering his own hardships.

In recent years as his health issues got increasingly challenging, it never soured his outlook.  As his discomfort increased, he made the decision to not turn bitter but rather to savor the moment.

In his final moments, as she has been for over 38 years, his wife Marilyn was at his side.

From the emergency department, to his final stay to his many stays over the years, the care that he received at Mattawa Hospital was exemplary start to finish.   Dave was greeted like a VIP as soon as he came through the door. You treated him with the utmost respect and patience. You rounded every corner, sanded every edge and gave him a comfortable place to land and repair upon every visit.

We are simultaneously brokenhearted to lose him whilst being enormously grateful for the many ways he enriched our lives.  Rest in Peace, Dave. You’ve more than earned it.

In keeping with his preference of not being “fussed over” and his deep-seeded modesty, he requested that we forgo a formal funeral service.  In lieu of flowers, we are asking a donation be made in his name to the Lung Association of Ontario.