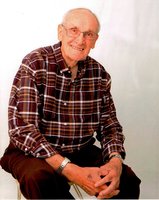 Rev. David John Harry Cook passed away peacefully on May 30, 2021 in the presence of his family in North Bay, Ontario.  He was predeceased by his wife of 47 years, Betty in 1998 and his second wife of 11 years, Helen in 2011. David is survived by his children, John (Faralee), Mardy (Dan), Bob (Diane) and step-daughter, Sherry.  He also leaves behind 10 grandchildren and 14 great grandchildren.

Two weeks after his discharge from the British Army, where he served during WW2, David immigrated to Canada in 1947 arriving on the first air charter of immigrants. He went on to earn both his undergrad and graduate degrees at Queen’s University, whereupon completion he entered ordained ministry in The United Church of Canada serving in Ontario, Saskatchewan, and Alberta.

“Do not mourn my passing for I lived a most wonderful and rich life full of all of God’s blessings” David Cook.

A celebration of life will be held at Martyn Funeral Home, North Bay, on Saturday June 5 @1100 am.  Under current Covid pandemic restrictions attendance at the service is limited and by invitation only. The service will be simultaneously broadcast on the funeral home’s Facebook page.   Internments in Calgary and White Rock to follow at a later date.

In lieu of flowers, donations can be made to the United Church of Canada’s Mission & Service Fund through Martyn Funeral Home.