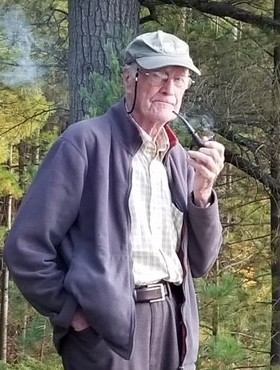 It is with heavy hearts that the family of Bill announce his passing at the North Bay Regional Health Centre, on Tuesday February 9th, 2021 in his 97th year. He was the beloved husband of the late Margaret Eleanor (nee Semple) and Bernice Nina (nee Smith). Loving father of Janet Howey (Robert), Doug Workman (Maggie Jia) and Elizabeth Watanabe. Dear grandfather of Jastin, Lisa, Jenna, Michael, Joshua, Isaac, Kagen, Reina, Seiji, Karac, Sydney and great grandchildren Kaleb, Rebekah, Evan and Oliver. Predeceased by his son-in-law Michiya Watanabe and his siblings Russell, Aleda and Grace. Bill was born, raised and loved living in North Bay. He was an infantry signalman with the Queen’s Own Rifles of Canada during World War II, serving in Canada, England and Holland. He later attended the University of Toronto, where he graduated as an Electrical Engineer. He returned home to North Bay in 1956 and worked for the Ontario Northland Railway for many years, along with Saudi Telephone and the Department of National Defence. He was a lifelong member and trustee of Emmanuel United Church, a member of the Canadian Club and the Association of Professional Engineers. His family wishes to thank Dr. Brian Shaw, the NBRHC staff, the VON nurses and volunteers, and his PSW Nancy for their grace, kindness and support. A Memorial Service to celebrate the life of Bill Workman will be held this summer. His ashes will be interred in the Workman family plot at the Terrace Lawn Cemetery. If desired, donations to Emmanuel United Church or the Canadian Cancer Society would be appreciated by his family or consider donating blood in this time of increased need. Arrangements entrusted to the Martyn Funeral Home