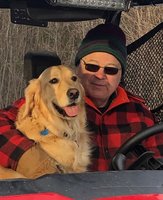 Paul passed away at the North Bay Regional Health Centre on Tuesday August 25th, 2020, following a brief illness. He is survived by his long-time partner and friend, Sherry Howard, his son Patrick Mooney (Kaitlyn Lovatt), his daughter Kate Ryan (Tyler Ryan) and his grandsons Anthony Ryan and Adrian Ryan. He will be sadly missed by his sister Mary Rick (Francis Rick) and their two children, Lisa Rick and Kevin Rick. He was predeceased by his parents James Mooney and Leota (Rowe) Mooney. Paul had a long career with the Ontario provincial government and was recognized for his background and expertise in labour relations. Paul retired in 2006. He described his retirement years as “the best of his life” developing his acreage in Hotham Valley. He spent endless hours gardening (mostly potatoes and garlic), hunting, clearing fields, cutting wood and building extensive trails, always with his loyal canine companions Gus or Butler(deceased) at his side. Paul was quite proud of the fact that he continued to play old timers hockey three mornings a week and loved the camaraderie with his team mates. Cremation has taken place. At Paul's request there will be no service.