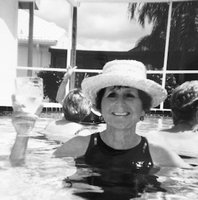 It is with heavy hearts that we announce the passing of dear Ellen, a woman of great courage, strength, grace and dignity. Born in Hamilton, Ontario to Scottish immigrants Helen and Daniel Todd, she went on to become a very proud Torontonian, living life to fullest, as much as she could.

Mum’s illnesses were often debilitating but she was always positive and chose to carry on, with head held high and dressed impeccably.  She was the ultimate mother and best friend to many and had the kindest soul. She was passionate about art, fashion, theatre, music, travelling and had great interest in the world around her. She will be missed beyond belief.

Mum’s words to live by: “Be Kind To Yourself”.

A celebration of her interesting and full life will be held at a later date, due to the crazy state our world is in at this time.